Nine on the Hudson 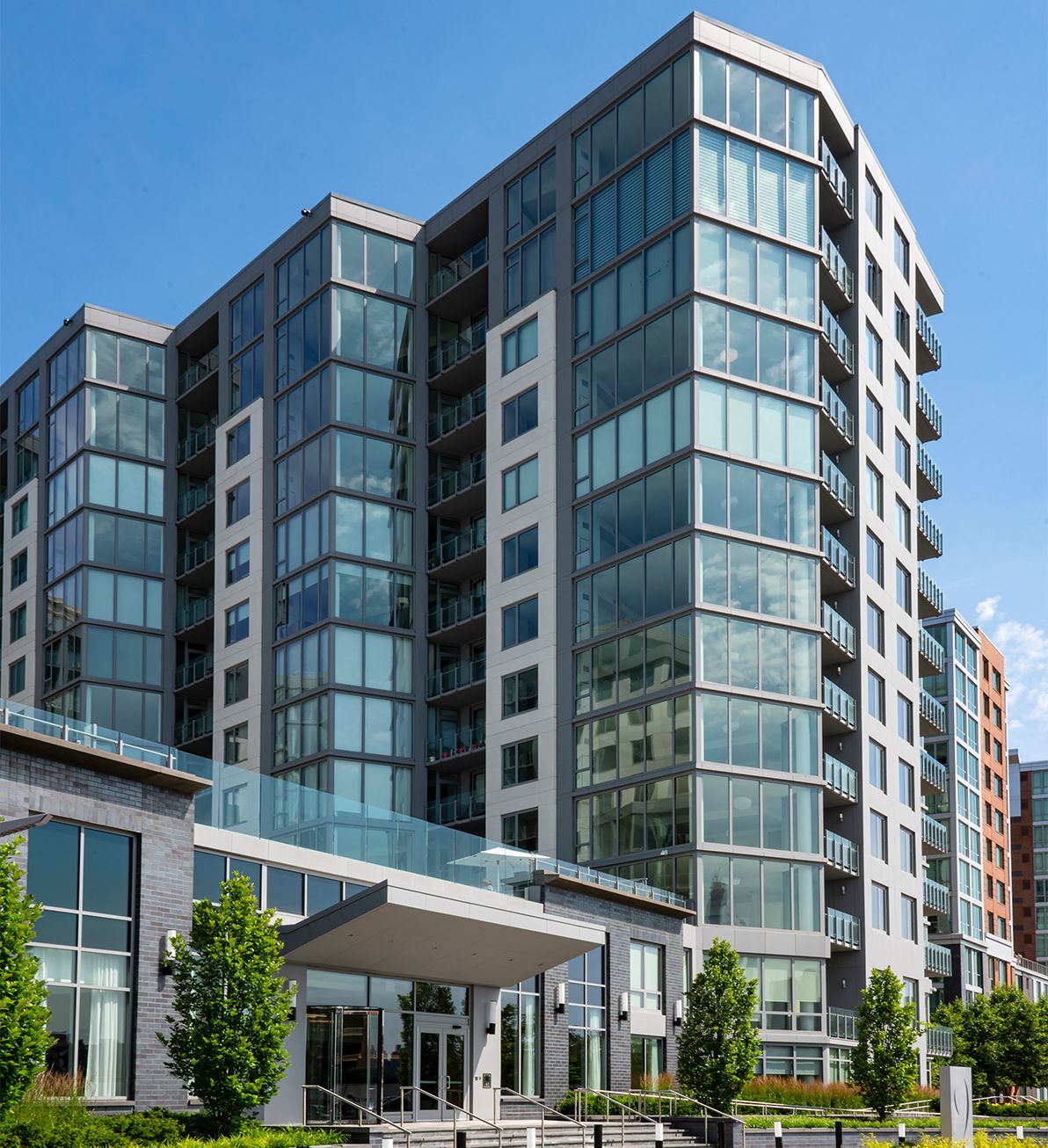 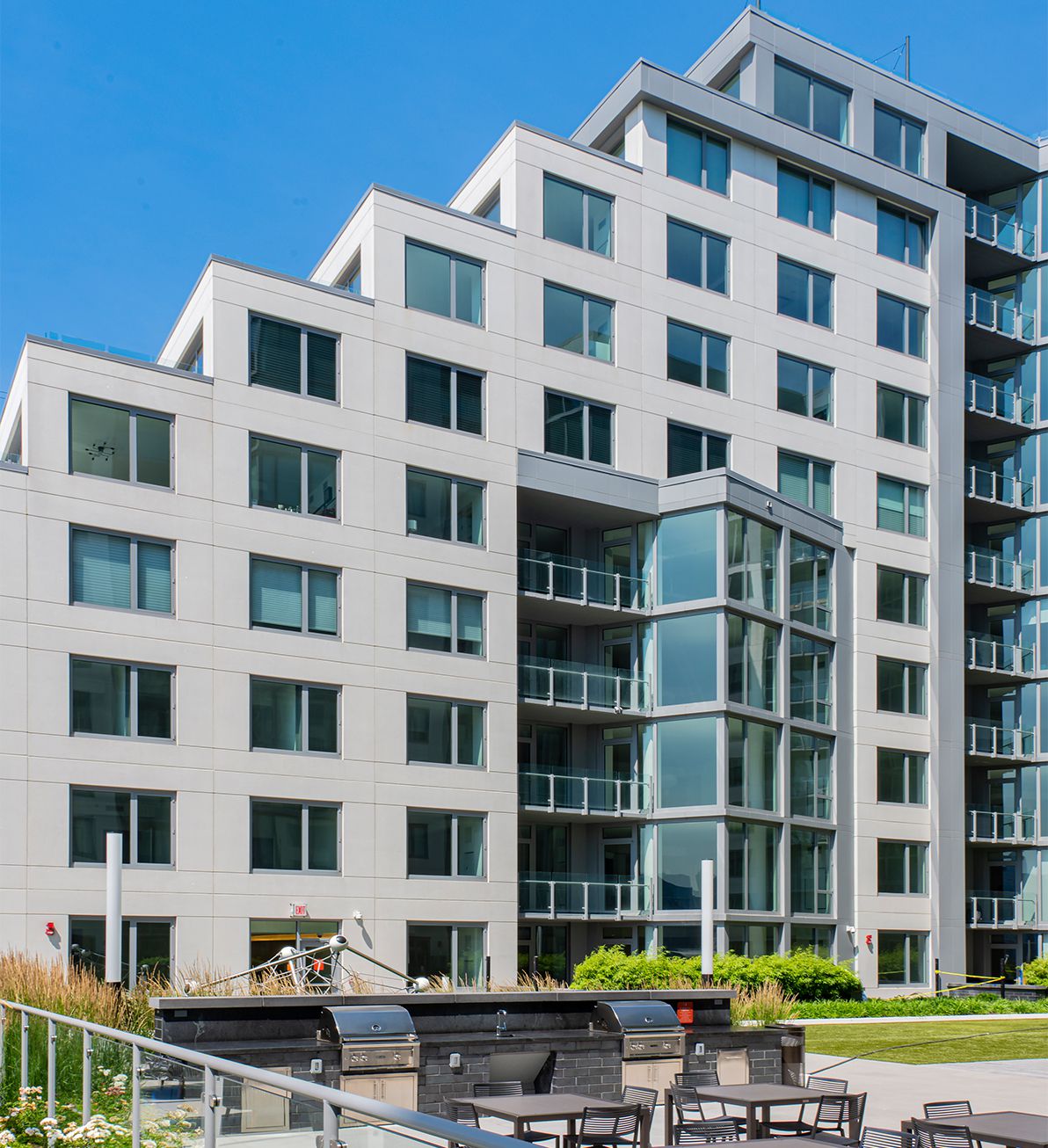 “People have a lot of assumptions, but when they come over here, they realize how nice it is. The views of the city and river are spectacular. It’s literally a perspective that can’t be offered within NYC.” Alexander Hovnanian, Area Vice President with K. Hovnanian 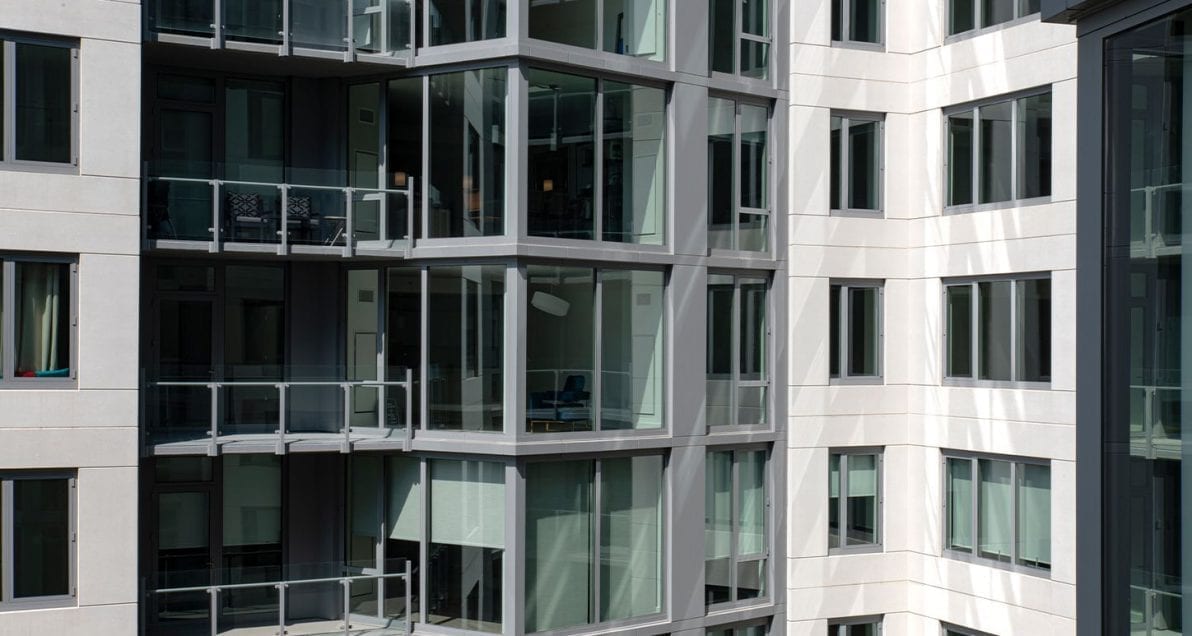 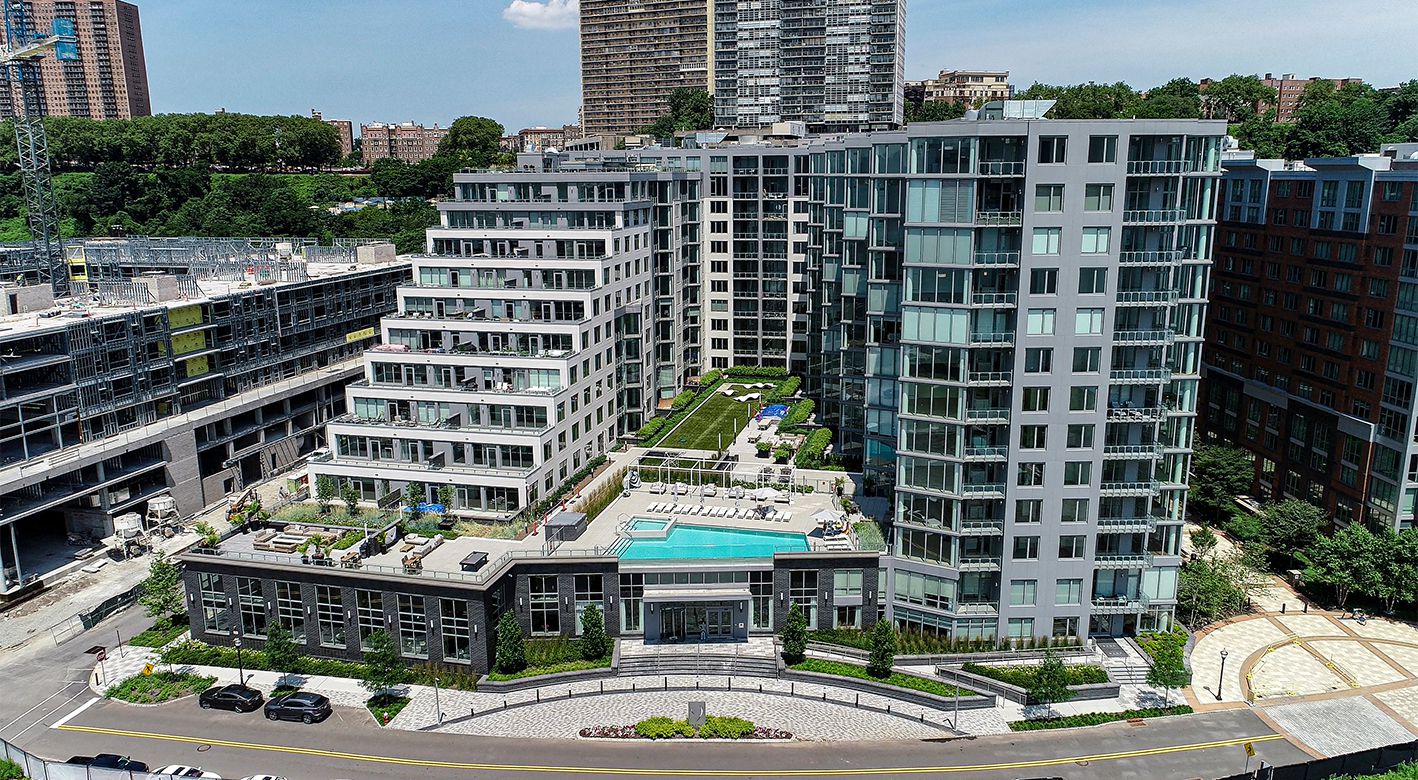 The 200-acre Port Imperial planned development stretches for two miles along the Hudson River, cutting through portions of West New York, Weehawken and Guttenberg, N.J. With midtown Manhattan just a 7-minute ferry ride away, this former home to empty warehouses and derelict railyards is being transformed into a vibrant mix of residential, retail and office space. One of the new editions to the burgeoning New Jersey Gold Coast, Port Imperial is a hot spot for new luxury multi-family residential development.

Among the star properties is the 278-unit Nine on the Hudson luxury condo building. The project has earned glowing reviews from both the New Jersey and New York City real estate press for its sophisticated looks and extensive amenities package – but buyers are mostly drawn by the stunning views offered of the Manhattan skyline, just across the Hudson.

Foresight pays off. Port Imperial sits in area along the New Jersey side of the Hudson River dubbed the Gold Coast, mirroring Manhattan from 33rd St. to 85th St. on the other side. Development planning first began back in 1981, when Arthur Imperatore, Sr., paid $7.5 million for the former Weehawken Yard. In 1986, he started up the New York Waterway ferry service to shuttle commuters to New York City. By the late 1980s, rental towers began sprouting, as both tenants and developers began to see value in Manhattan skyscraper views and access without that city’s sky-high rents.

A strategic site plan was developed for master developer Roseland Property Company by the early 2000s, which was when Nine on the Hudson developer K. Hovnanian began its plans for the 13-story high-rise. “Then the market turned in a different direction and we mothballed the site, at that point,” says Michael Wong, the company’s community construction manager.

K. Hovnanian’s involvement was an early indicator of Port Imperial’s significance to the region’s real estate market. The company is a New Jersey-based developer of residential projects across the United States. Established by Kevork S. Hovnanian in 1959, the company has grown to become one of the nation’s top 10 homebuilders, constructing subdivision-style communities, active living developments and high-rise condo buildings. It became a publicly traded company on the New York Stock Exchange in 2001, with revenues of $2.0 billion.

As the real estate market rebounded, along with the rest of the economy, the mothballs came off the Port Imperial development site and the plans were reimagined to meet current market demands. K. Hovnanian broke ground in 2015 on its ambitious new project. Nine on the Hudson was opened for sales in 2019. Prices on the 278 luxury units range from $899,000 up to $8 million for the 4,000 square foot penthouse at the opening. Currently only 16 units are available for sale with a $948 per square foot average asking price.

Stepping up the level of expectations. While location is certainly a big part of the draw for Nine on the Hudson, good looks and amenities have helped the developer charge premium prices. This is one of the only “for-sale” properties in Port Imperial, Wong says, with the majority of new residential properties being rentals. So, the company worked to provide enticements, which include a 2-story fitness facility, 24-hour concierge services, a rooftop lounge and even a dog wash.

The 466 SlenderWall panels, in a smooth acid-etch finish, help call out the ziggurat-style tiering of one wing of the horseshoe-shaped building. SlenderWall assemblies combine an exterior panel with vapor/air barrier, closed-cell foam insulation and interior framing studs, were shipped to the site, ready to install, providing a significant on-site labor savings. The panel insulation’s R-Value of 21 also helps ensure residents stay comfortable, no matter what weather extremes the waterfront location might present.

The final design differed somewhat from what K. Hovnanian’s planners originally had in mind, according to Wong. The company revised its brief when architects with Marchetto, Higgins and Stieve came on board for the revitalized project. “The prior building concept was more for over-55 buyers, this one has a lot more amenities than previously,” he says. “It’s similar to the prior design, but it gave us a lot more views.”

The unique composition of the 30lbs. per square foot SlenderWall panels was key to achieving the goal of larger viewscapes. With their lighter weight, SlenderWall panels enable designers to incorporate large window openings without compromising structural integrity. Additionally, the manufacturing system creates efficiencies of scale, which this project’s architects used to great advantage. Here, the panels were designed in a repetitive, squared-donut arrangement that both met design goals and facilitated a very efficient layout across the building’s façade. The panels’ weight advantage also allowed installation to occur from a single tower crane across the building’s wide footprint.

SlenderWall offers designers of high-end projects an aesthetic advantage, according to Art Miles the president of SlenderWall’s parent company Easi-Set Worldwide. “From an architectural standpoint, we can mimic any of the finishes that give a high-end project its oomph,” he says. “There’s very little that we cannot do – I know we have one of our licensed manufacturers who’s been experimenting with polishing SlenderWall for a granite finish. And with colors, you can either stain it or integrate color into the concrete mix. Plus, you’re getting something that’s easily installed, and it comes insulated – and, in many cases, the windows are already installed, as well.”

Reception for the completed Nine on the Hudson has been more than positive. Highly covered by the real estate press throughout the region, even the New York Times has touted the value offered for easy access to Manhattan’s benefits, at a significantly lower price than similar properties within the city, itself.

Developers wanted owners of each of the 278 units in their condominium project to have views of the Hudson River. This led architects to the resulting 13-story “horseshoe” design. Making the most of the views also meant making the most of windows, and SlenderWall panels’ lightweight construction aided this goal, enabling larger openings without compromising structural performance. That weight advantage also allowed installation to occur from a single tower crane across the building’s wide footprint. Additionally, the modularity of the panels’ “square donut” design helped speed manufacturing and keep costs down.

Maximizing window openings was a critical design goal for the architects of project. The unique composition of SlenderWall panels was key to achieving that goal. With their lighter weight, SlenderWall panels enable designers to incorporate large window openings without compromising structural integrity. Additionally, the manufacturing system creates efficiencies of scale, which this project’s architects used to great advantage. Here, the panels were designed in a repetitive, squared-donut arrangement that both met design goals and facilitated a very efficient layout across the building’s façade.  Lighter weight panels allowed for larger panels to be used and still be within the weight limitation of the tower crane.  Lighter weight panels also kept the piece count down which led to lower costs.

SlenderWall’s wall system incorporates high-tech PVA fiber and welded-wire reinforcement, stainless steel fasteners, heavy-gauge galvanized steel studs and energy-code compliant closed-cell foam insulation into each architectural precast panel. This enabled the system to address multiple high-performance goals for the project without need for additional trades or building materials, including: 1. The state’s requirement for continuous exterior insulation – the integrated closed-cell insulation built into each SlenderWall panel creates a layer of continuous insulation that can be specified to meet each project’s needs. 2. Storm-related wind resistance, given the project’s location on the shore of the river, SlenderWall’s PVA fiber and welded-wire reinforcement provide added structural integrity to every panel. Plus, the panels’ attachment system isolates the exterior cladding from other structural stresses related to wind loading, steel frame movement, expansion and contraction and even seismic shock. 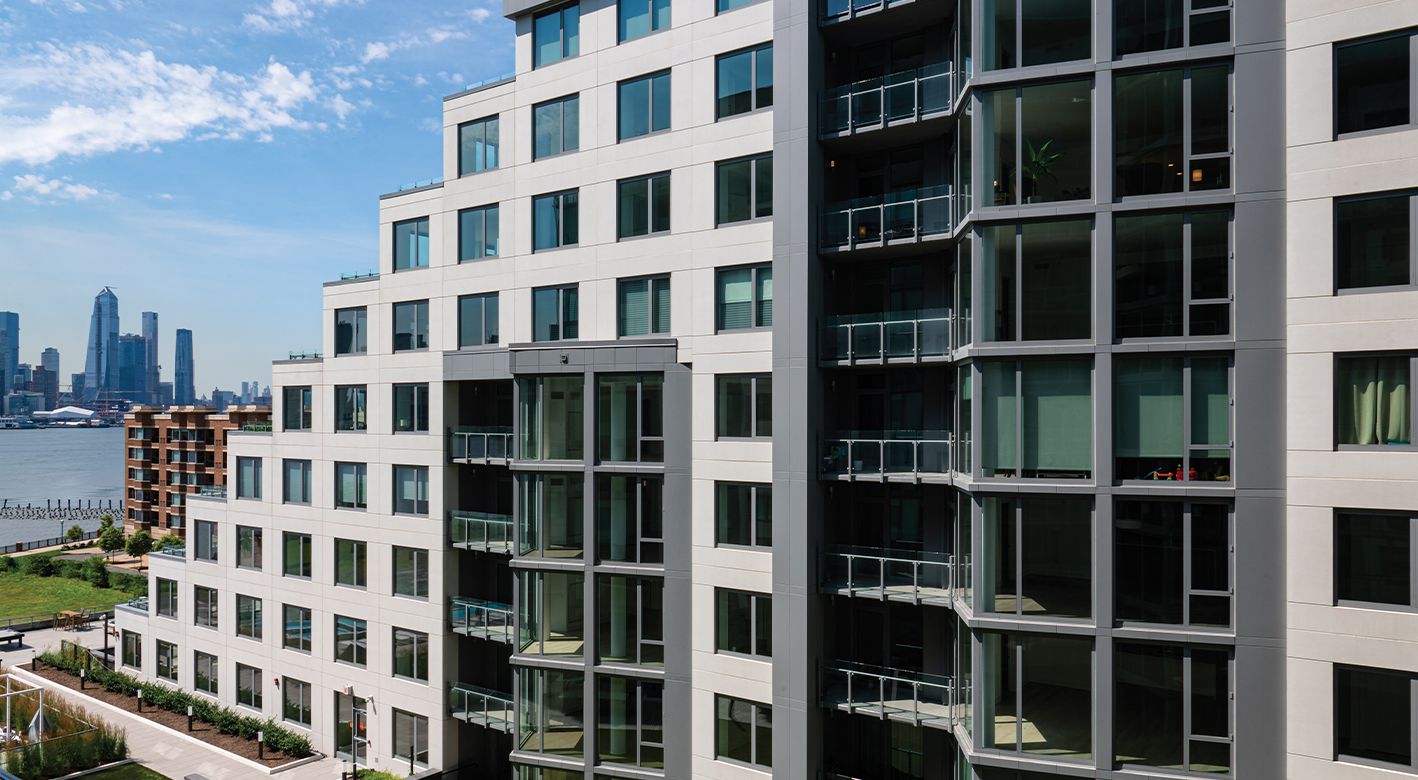 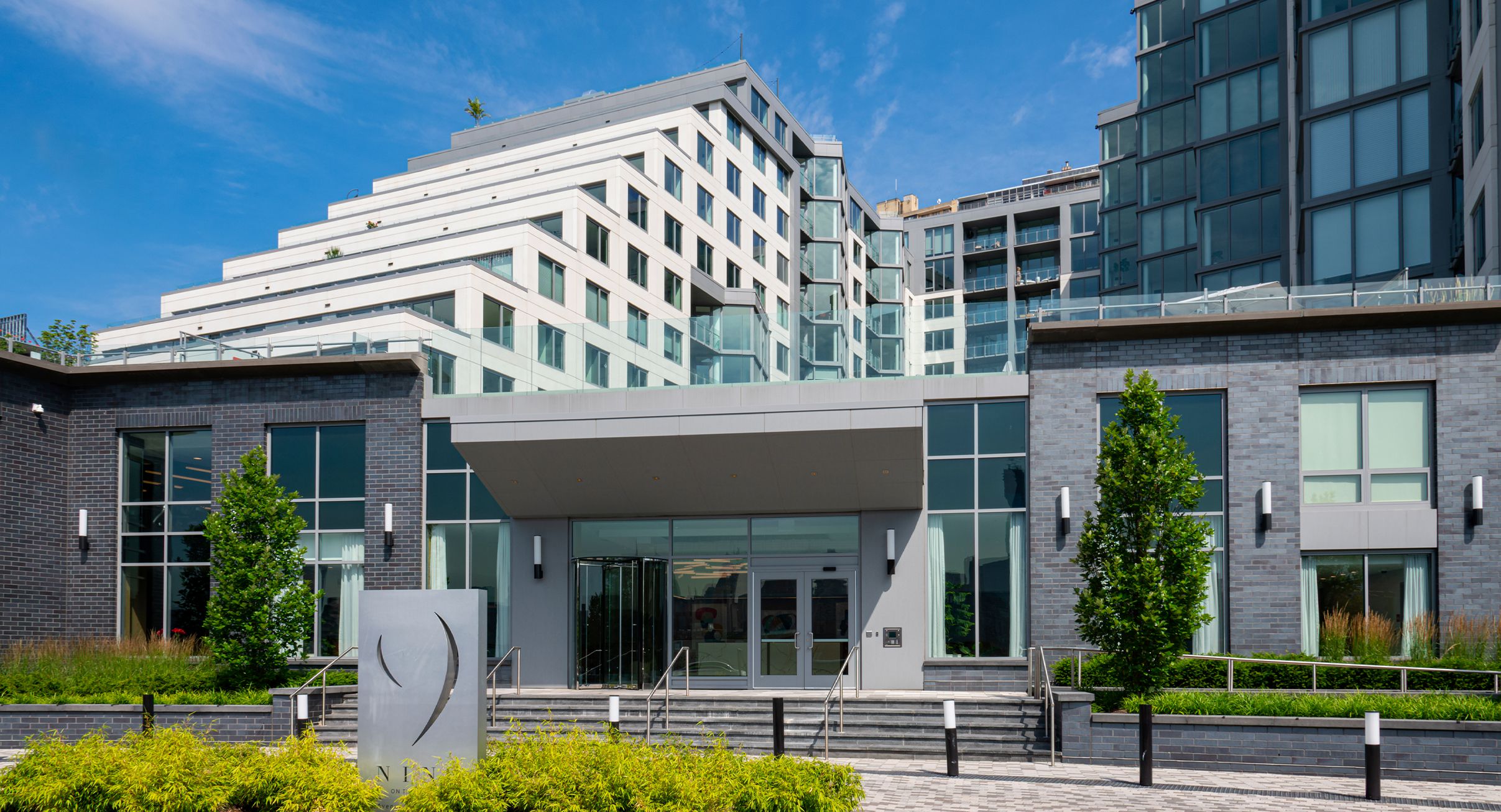