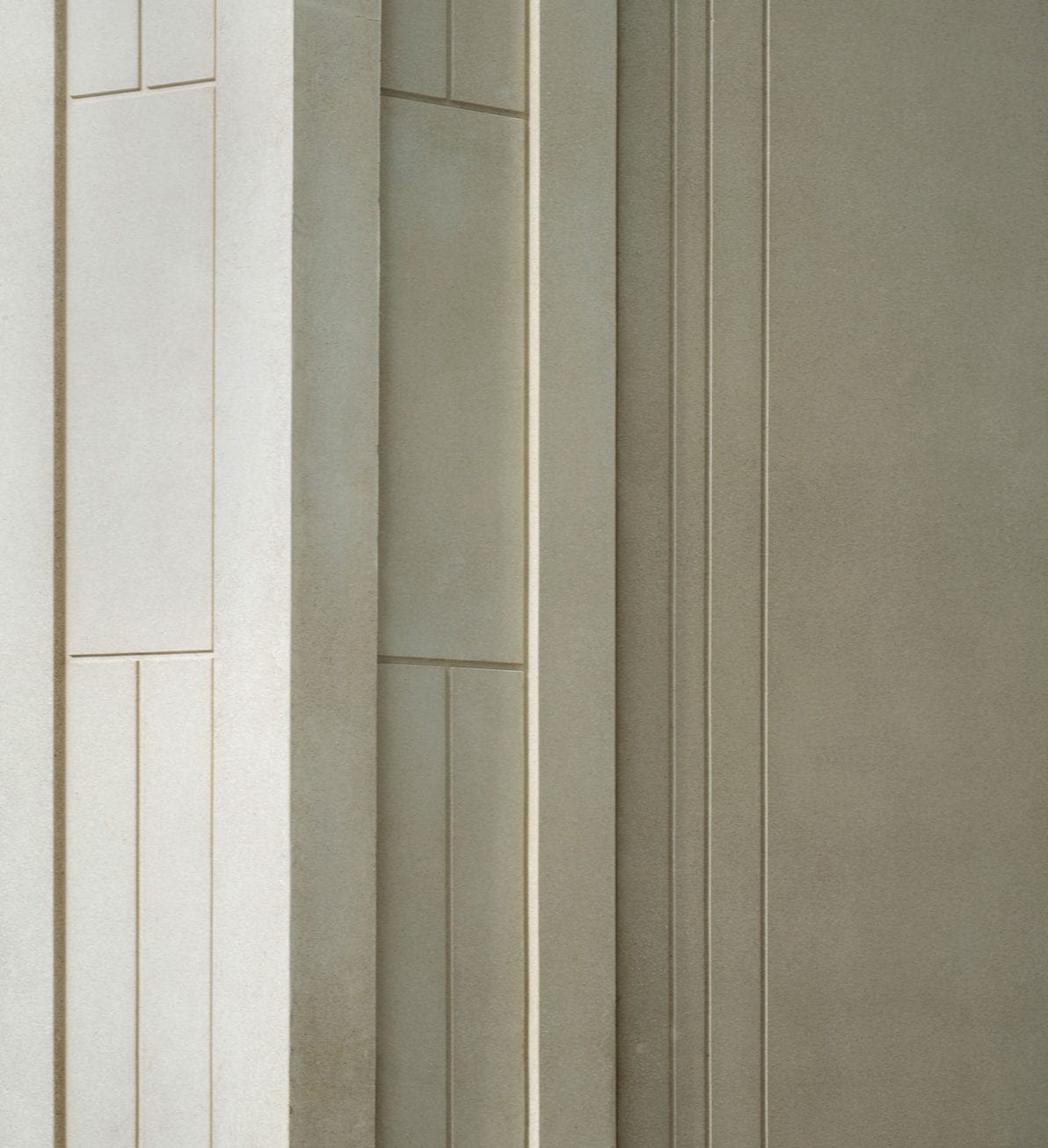 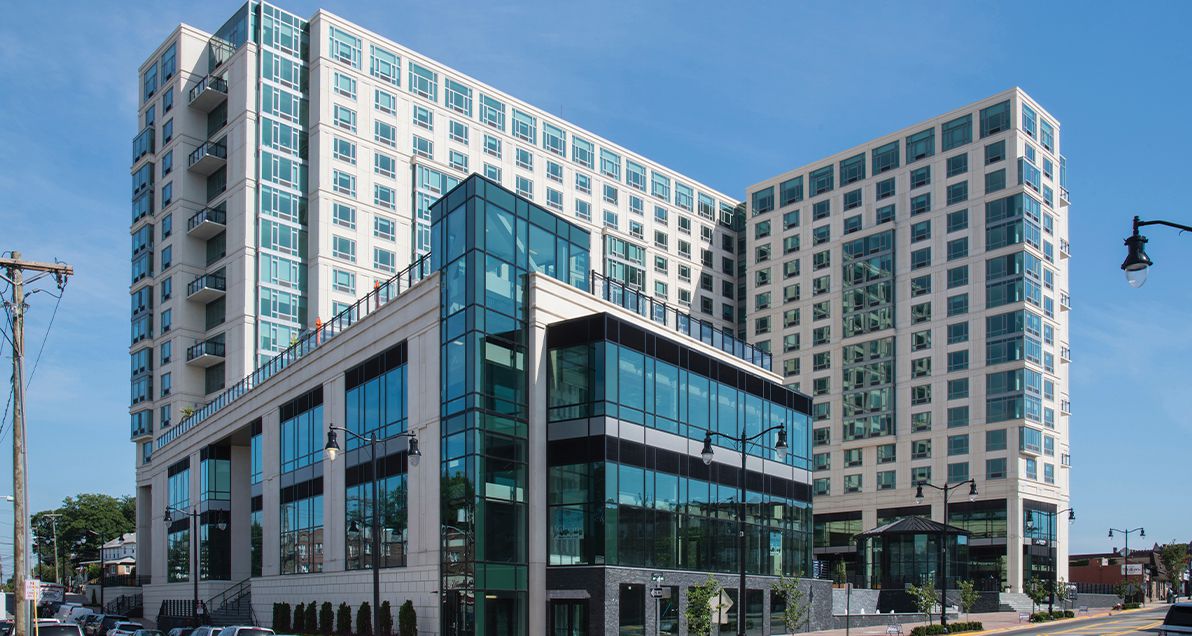 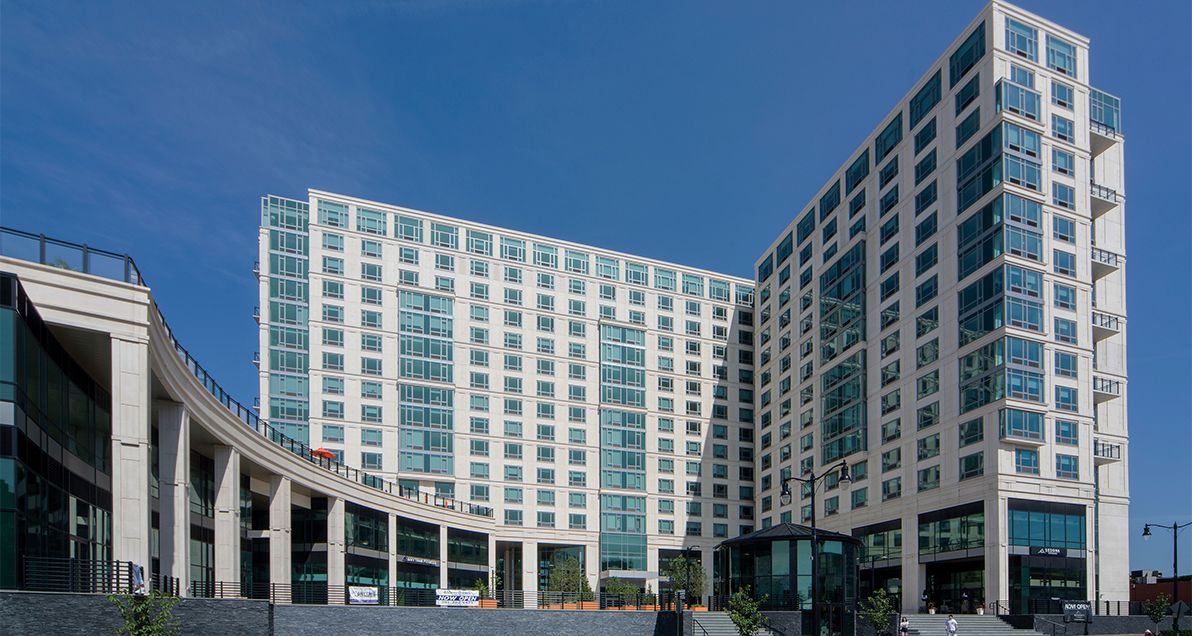 “They don’t think about just their product, but how it fits into the rest of the system,” he says. “We would be more than happy to work with them again.” James T. Virgona, architect with Virgona + Virgona 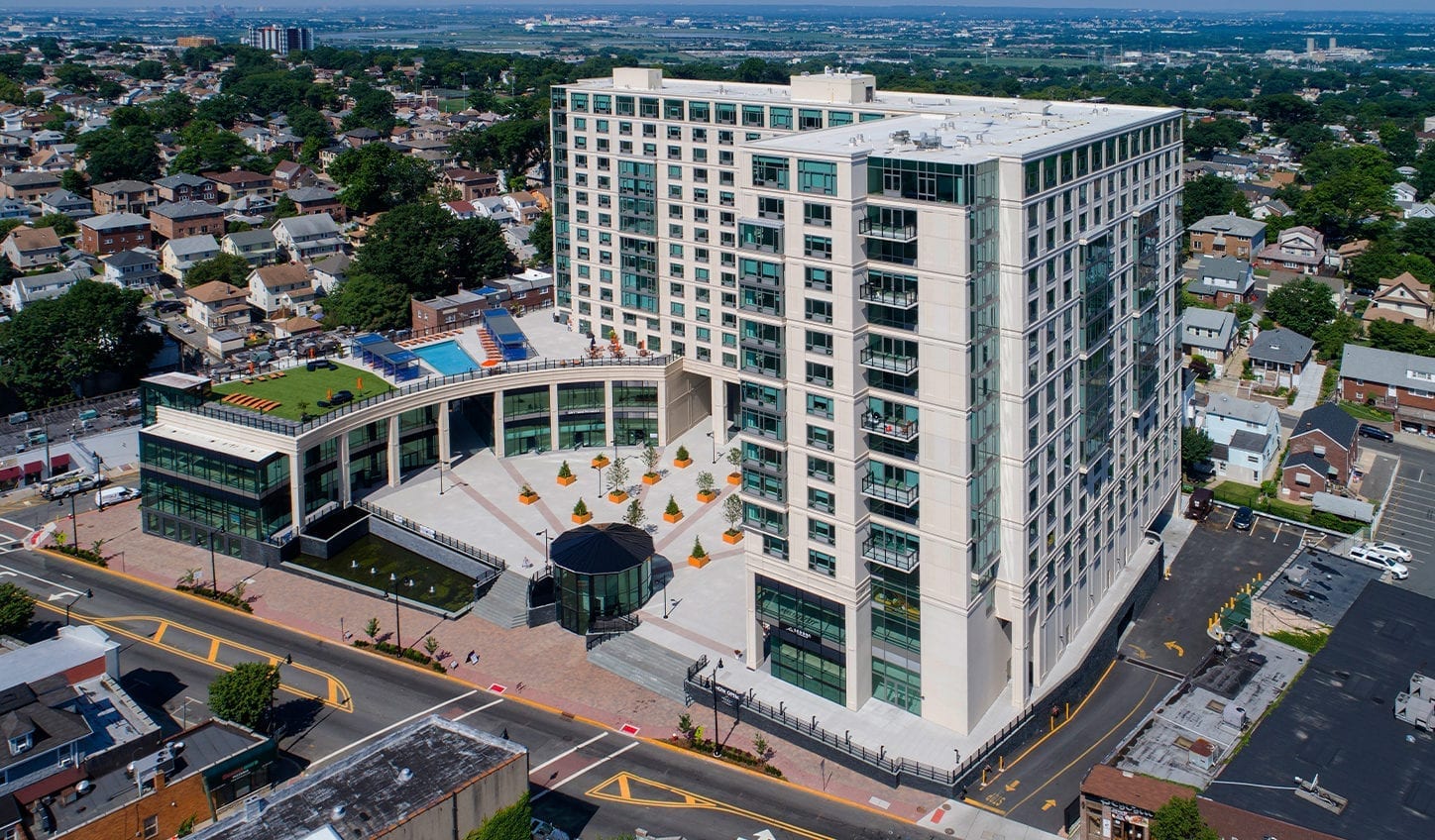 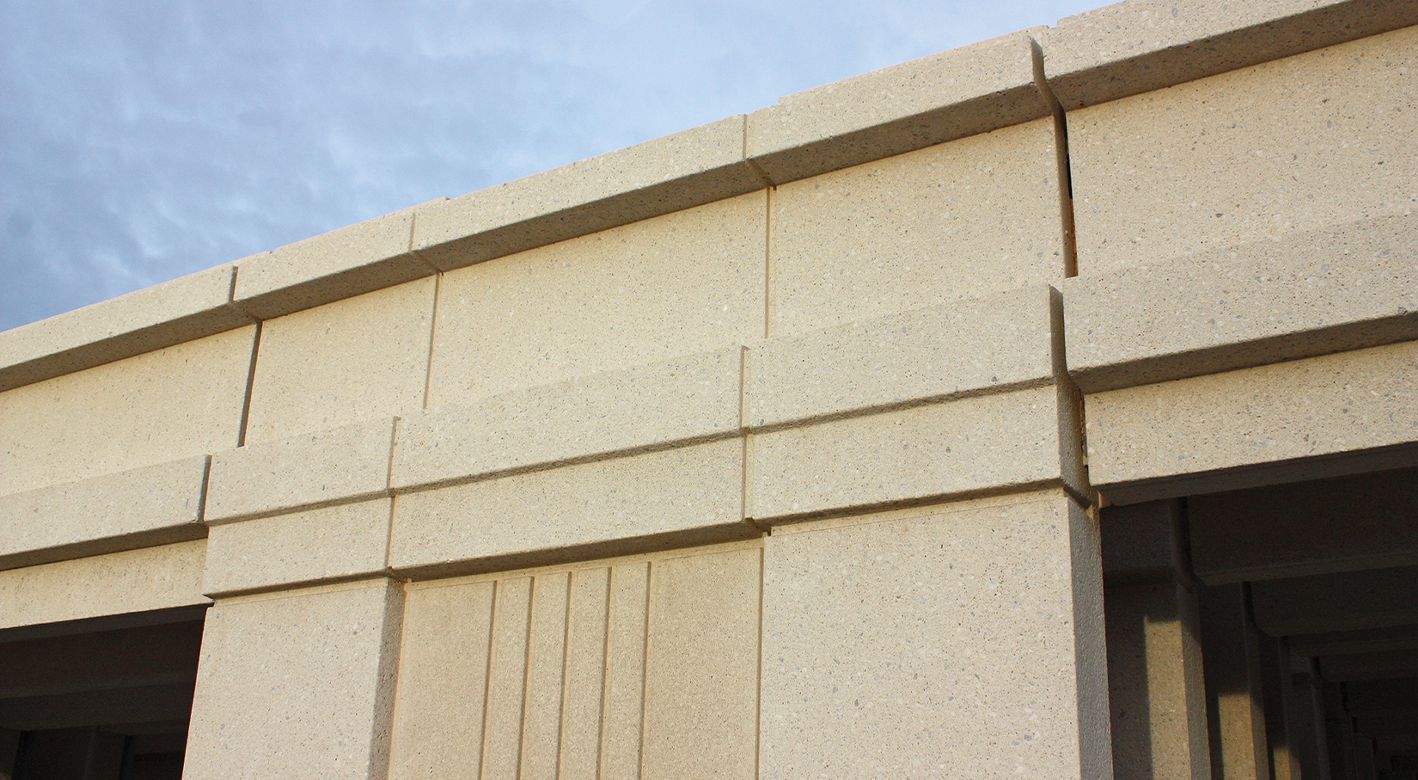 Cliffside Park, N.J., town officials had big plans for revitalizing their downtown when they began assembling properties for a new, signature mixed-use development back in 2002. With 13 stories of rental apartments atop a two-story retail level, Cliffside Park Town Centre was seen as a way to bring new energy into a tired business district. While a major recession and unforeseen subsurface challenges forced some major delays in the project’s timeline, the use of SlenderWall precast panel assemblies helped the effort get back up to speed.

SlenderWall assemblies, which combine an exterior architectural precast concrete panel with vapor barrier, closed-cell foam insulation and galvanized framing studs, were shipped to the site, ready to install, providing significant labor savings. The panels’ unique M-shape also allowed for larger windows, giving future tenants even greater access to dramatic views of the Manhattan skyline. And the availability of acid-washed and sandblasted finish options ensured both designer and developer would get the natural stone appearance along with extensive decorative reveals and projections they wanted for this prominent project.

Plant-manufactured SlenderWall provided the owner fewer costs, decreased construction schedules and additional site access savings, since the panels came as finished units. In addition, the panels were installed at night utilizing the crane that was already in place for setting structural components during the day.

The central location and magnificent opportunity for views across the Hudson River to Manhattan would seem to make the Town Centre’s site a no-brainer for a signature residential high-rise. But the area had, instead, languished, earning the designation of “redevelopment zone” when this project was first envisioned. Cliffside Park planners hoped the effort would kick-start interest in the surrounding downtown district. The quick access to the George Washington Bridge would also provide a more affordable housing option than Manhattan.

“The intent was that it was going to replace underutilized properties to revitalize the center of town,” says James T. Virgona, architect with Edgewater, N.J.-based Virgona + Virgona Architects and the designer of the project. However, just as the 3.3-acre property was secured, the Great Recession put the project on hold. When it started up again several years later, a new hurdle emerged: under-surface conditions including a base of extremely hard rock and a previously unknown underground spring. The latter forced the design team back to the drawing board, as it meant the entire project had to be raised by four to five feet.

Already leaning toward “classically inspired modernism,” Virgona doubled down on this approach as the raised site began to resemble a plinth – the base of many traditional Greek and Roman columns. That plinth has taken the finished form of a broad public plaza, with a decorative central fountain and surrounded on three sides by two stories of retail space. With three levels of parking below and a transit stop in front, the plaza was designed as a gathering space for both building residents and casual shoppers – and as a possible business booster for other stores and restaurants in the area.

A Perfect Structural Match for SlenderWall

To give residents of the Town Centre’s 300-plus luxury apartments maximum flexibility – and to minimize obstacles to the stunning views – Virgona’s design incorporates a staggered-truss structural system that significantly frees up interior space. Using floor-to-ceiling steel trusses in a pattern that alternates from floor to floor, this approach transfers the entire building load to exterior columns.

“The structural system used about half the steel as a typical design,” Virgona says – though he noted the 13-story project still required more structural steel than was used in New York City’s Madison Square Garden. “Yes, you have very large exterior columns, but you have no interior columns.”

As is typically the case, the staggered truss system was paired with precast concrete plank flooring. The floor planks were fabricated with embed plates for connecting the SlenderWall exterior panels. This installation process was choreographed to such a degree that, according to Virgona, “the panel façade was being applied to the building even as the structure above was still being constructed.”

Virgona and his team worked closely with the technical staff at Smith-Midland, the SlenderWall manufacturer, to develop the highly coordinated delivery and installation schedule. And, the architect says, the staff’s in-house architectural and engineering experts also were helpful during the project’s design – especially with a two-story retail wing that appears to curve out along the left side of the central plaza.

“It’s not really curved, it’s segmented,” Virgona explains, noting that the detailing at the points where glazing, steel structural elements and SlenderWall panels come together at segment joints became quite a challenge – a snug fit was essential for both building tightness and aesthetics. “The challenge was, how we were going to fill all the gaps,” he says. “Smith-Midland was helpful in coordinating the product with all the other elements.”

As a design pro who was new to the SlenderWall offering, Virgona found this level of customer service to be especially helpful. He says this assistance extended to suggestions for design detailing that maintained larger project goals while reducing the number of custom forms that needed to be produced. The result was a modular approach to the forms that allowed a single form to be used to create multiple panel shapes, which helped keep the project on budget.

A concern for Virgona was just how well the panels’ thermal barrier would work in isolating the panel face from the assembly’s steel frame. A nearby structure, completed a decade earlier, was clad in a competing product and already is showing signs of premature aging, with stains already appearing at attachment points – and the architect feared the possibility of something similar happening on this project. “It was a good example of what to avoid,” he says. “But they were able to create a thermal barrier between the face and the frame. The product has really been designed to address the pitfalls – they really thought the solution through.”

Virgona says he’s exploring using SlenderWall in at least two other projects – and he’s recommended it to others who’ve gone on to specify the product in their own work. The combination of product performance and design assistance has him sold on this highly efficient approach to building-envelope development. 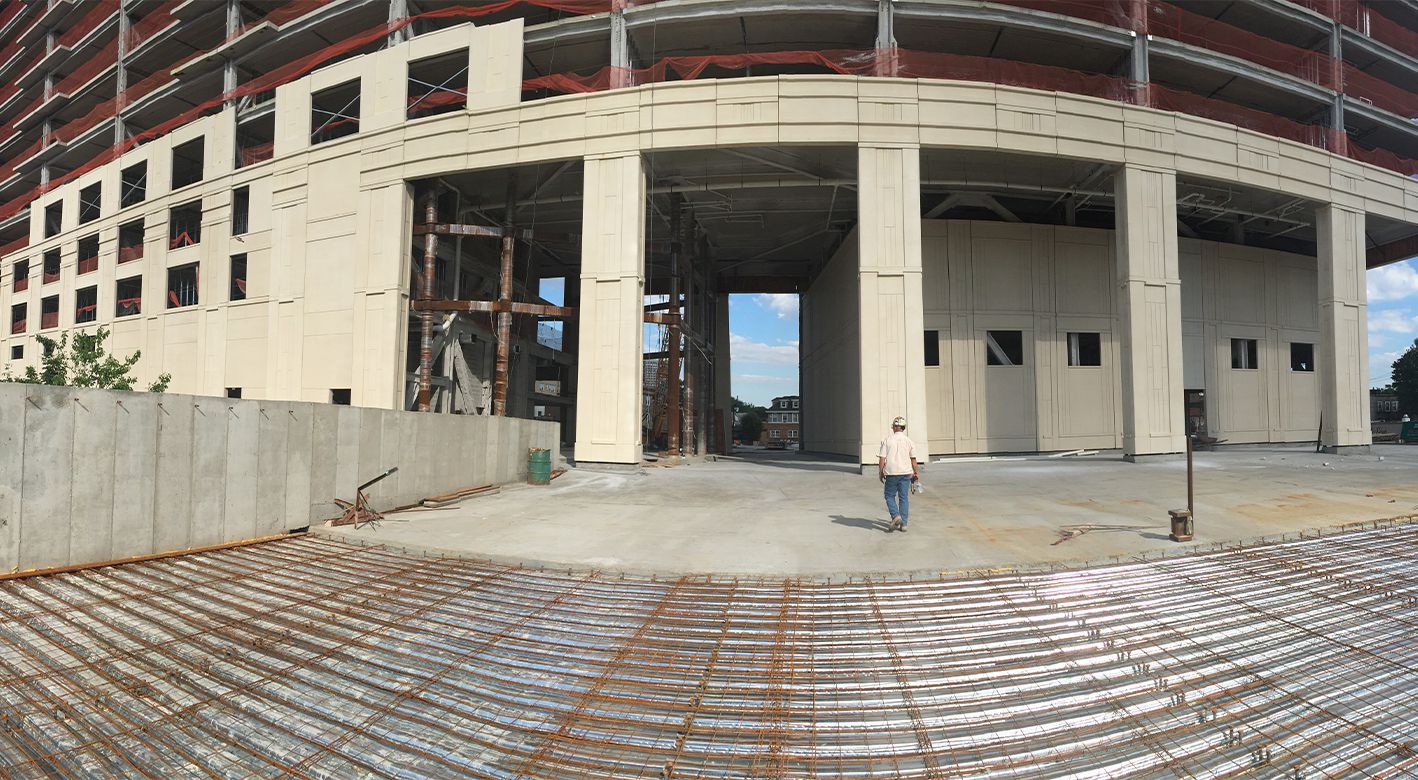 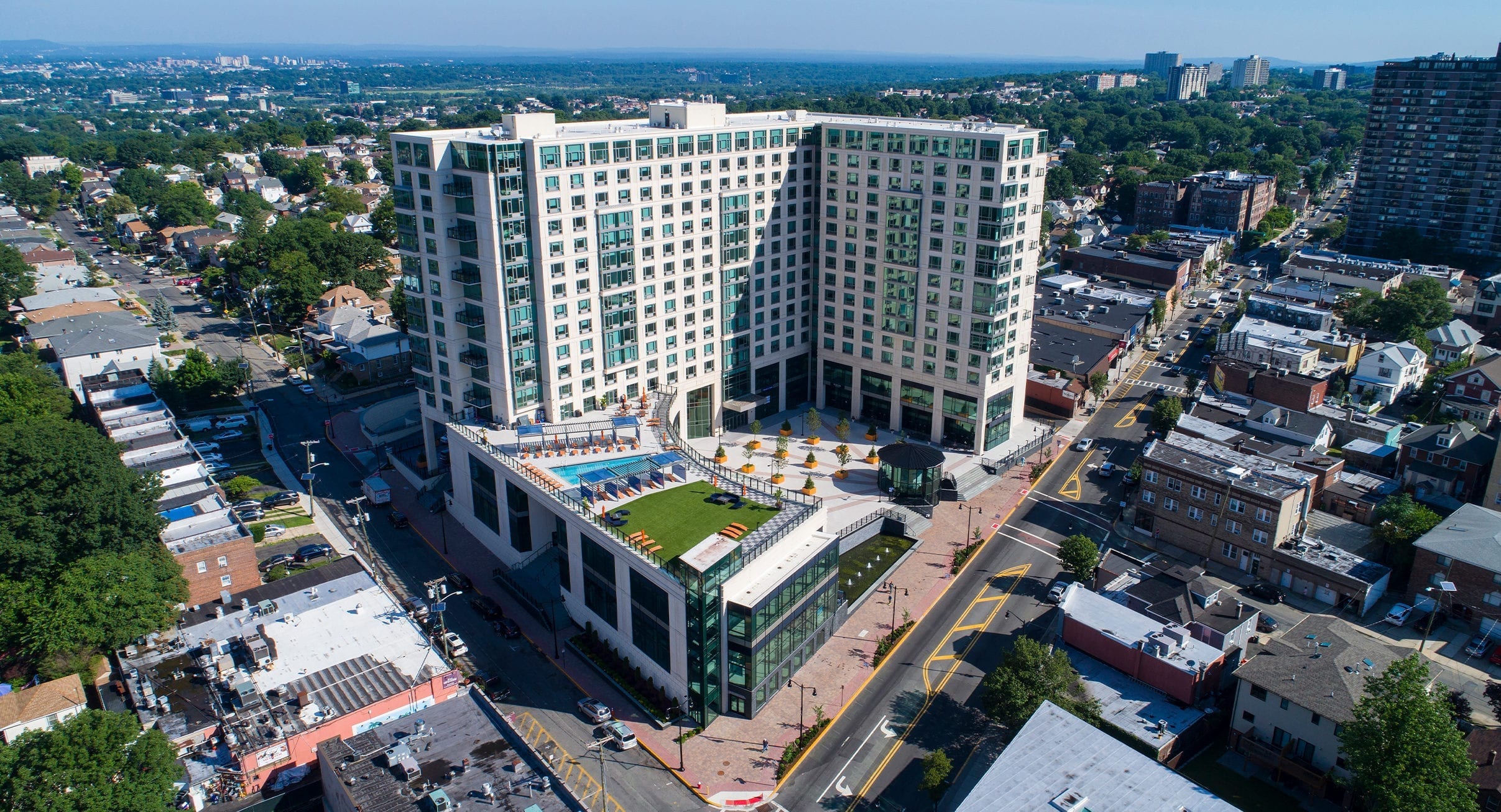