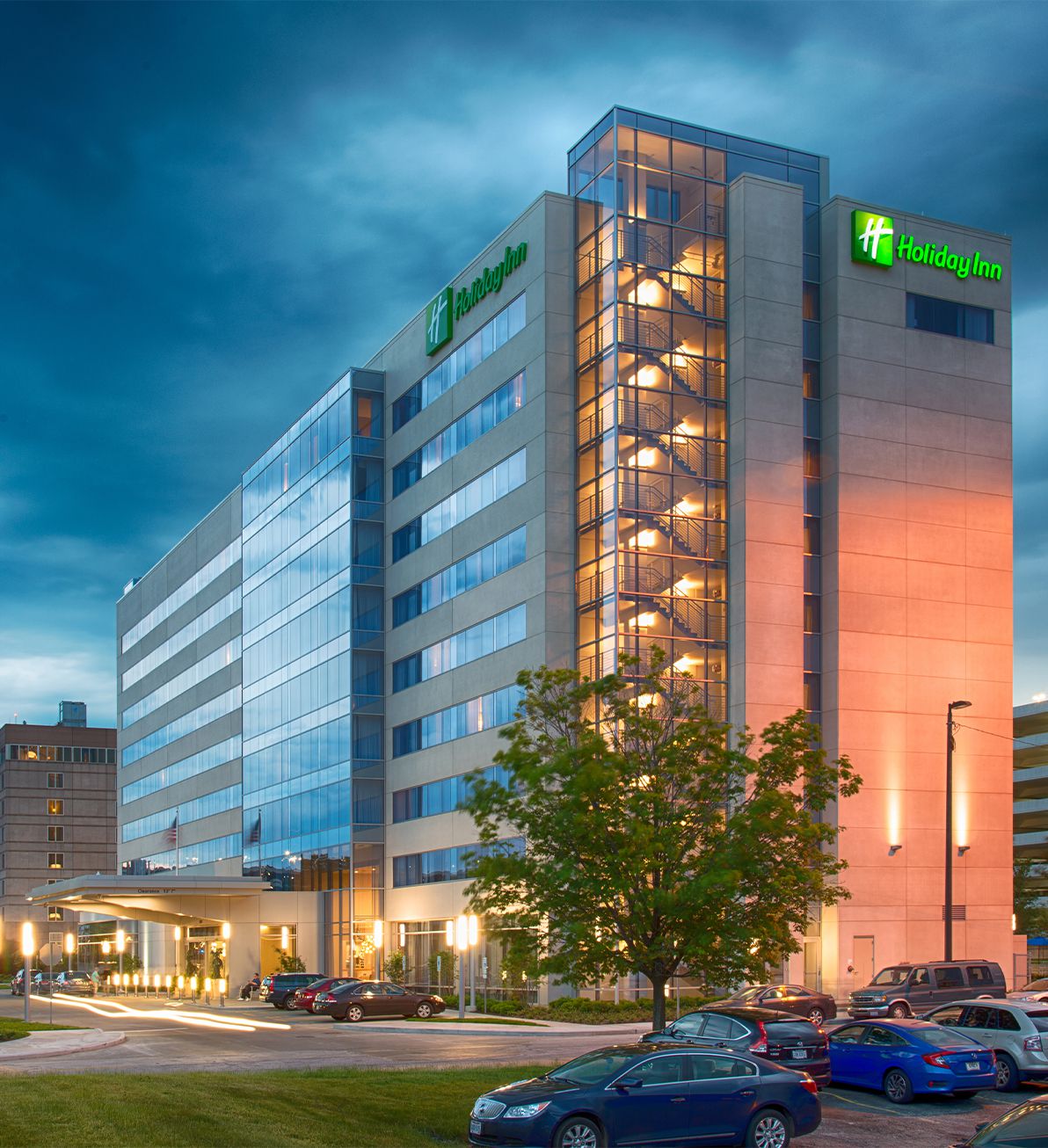 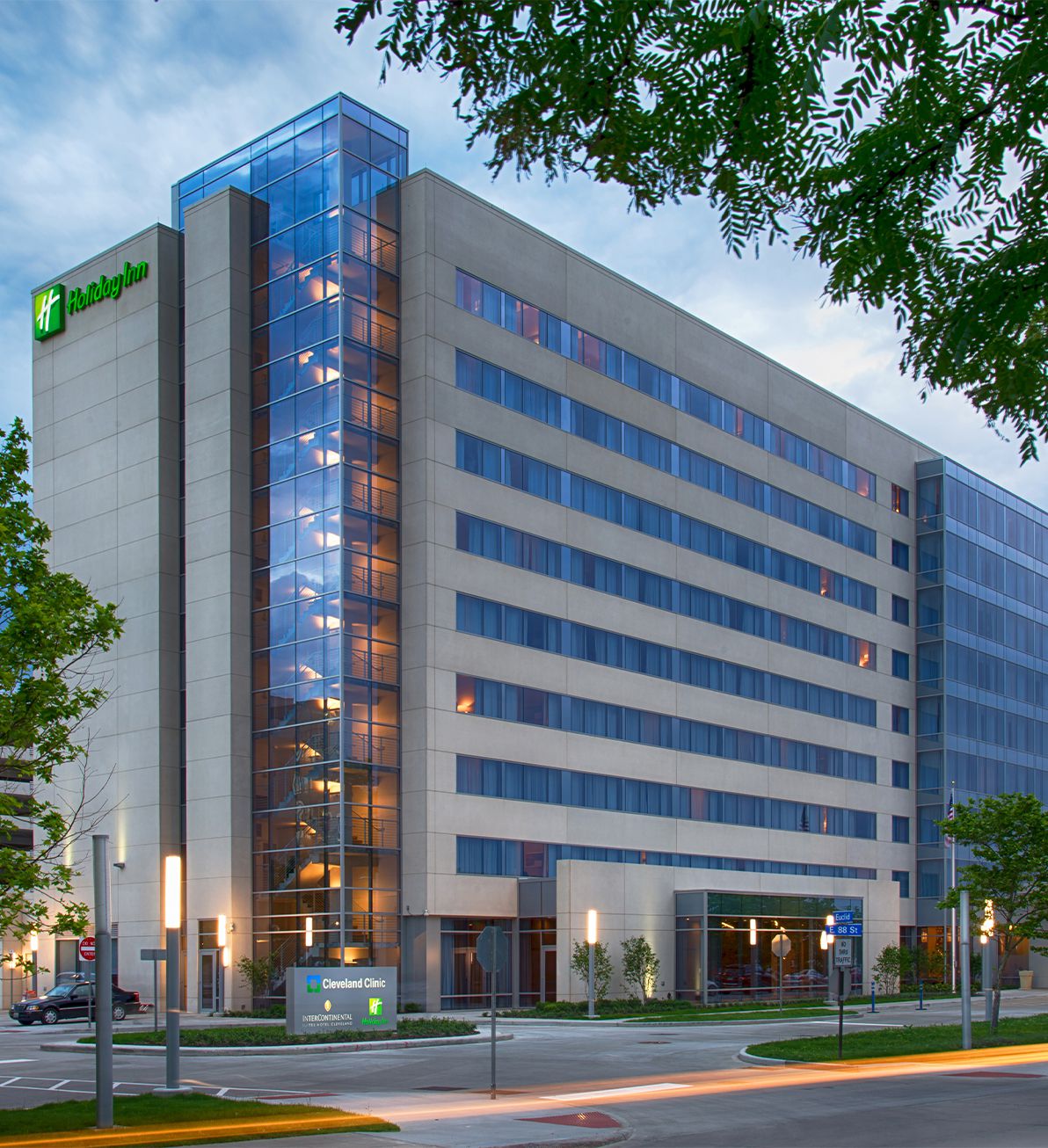 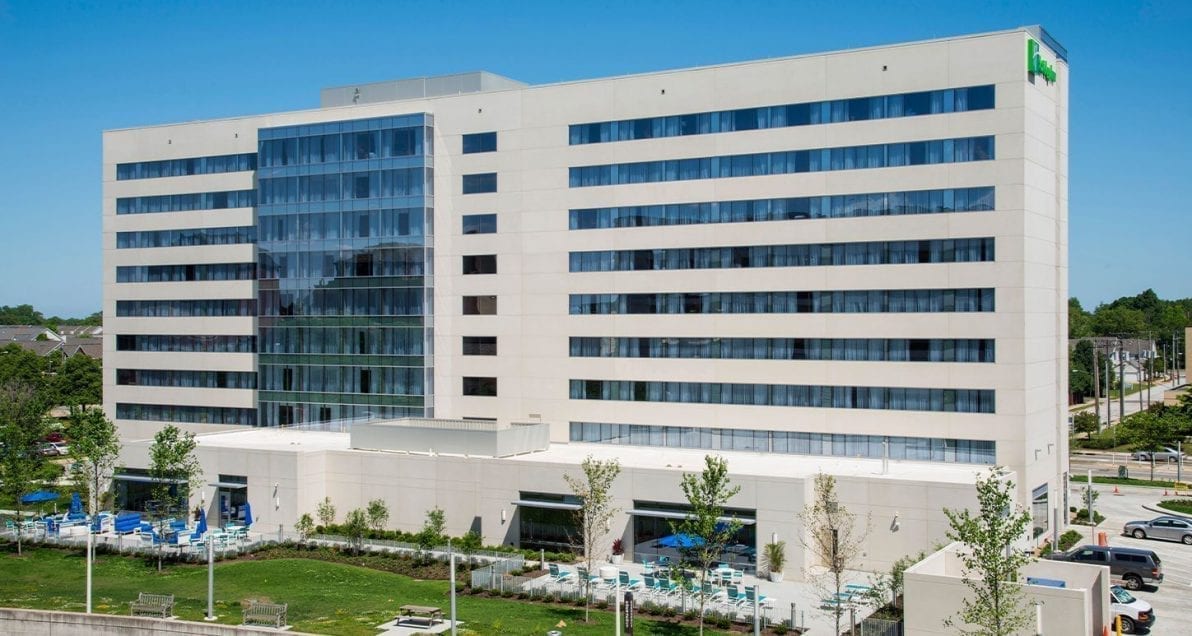 Architectural precast panels have been a “go-to” cladding material for decades in the hospitality industry. With their design versatility and modularity, these panels offer advantages for architects and contractors, alike. However, precast also can pose some challenges – notably, in its weight. An increasingly popular alternative, SlenderWall, incorporates precast’s design flexibility into a lighter-weight assembly that also includes a vapor barrier, insulation and interior framing studs. The product’s installation advantages are winning new converts among hotel developers, including the team behind the recently completed Holiday Inn located on the campus of Cleveland Clinic in Cleveland, Ohio.

Bringing hospitality to world-class healthcare. Cleveland Clinic is a world-class research and clinical care institution, with more than 40 buildings (including a hospital with more than 1,400 beds) across its 165-acre grounds. Patients and their families come to the Clinic from across the United States and around the globe for treatment. The need for nearby lodging to serve these visitors became obvious when the Clinic chose to demolish a former guest house to make way for a new medical-education complex.

The hometown firm of Kaczmar Architects, Inc., (KAI) landed the design contract for the 276-room hotel, operated under the Holiday Inn brand, that was intended to take the place of the previous guest house. This firm’s first task was ensuring its plans meshed with Cleveland Clinic’s well-defined architectural guidelines. KAI wasn’t a newcomer to these requirements – as architects for several other recent projects on the campus, they were very familiar with their client’s fit-and-finish priorities.

“White everything,” is the shorthand Dave Kaplan, project manager for work on the hotel’s exterior façade and its detailing, uses to describe these guidelines. He adds that modernist touches, such as incorporating glass curtainwall and wood interior-trim detailing, also can be incorporated. “They have a very simple color palette that we have to adhere to.”

KAI architects have frequently turned to traditional architectural precast panels as exterior cladding for other hospitality projects, as well as other KAI projects on the clinic’s grounds. Initially, Kaplan and his team were focused on this material for the nine-story Holiday Inn, as well. But when the building team, which also included contractors Walsh Construction and Forest City Erectors, started costing out installation – including the large cranes required to lift very heavy precast panels to eight-story heights – it became very clear an alternative solution was needed.

Representatives from Chicago-based Walsh Construction had worked successfully with SlenderWall on previous projects and suggested that Kaplan take a look at the product. He quickly saw opportunities for budget savings, without compromising the design, given SlenderWall’s significantly lighter weight and faster installation time. Because SlenderWall panels combine multiple building elements into a single system, they can shorten a project’s overall construction schedule significantly.

“The initial reaction was, ‘What’s the catch?,’” he says, remembering some initial skepticism from the building team. “Then we soon realized there was no catch.”

Designed for performance. The outer face of a SlenderWall panel is 2-in. of architectural precast concrete containing PVA fiber and welded-wire reinforcement. Even with the addition of the vapor barrier, insulation and framing studs, the entire assembly is a third the weight of traditional 6-in.-thick architectural precast. Especially appealing to owners and construction managers, is the fact that any potential exterior wall problems can be addressed through a single-point-of-contact.

“It’s essentially a one-phone-call product, because a SlenderWall panel contains the framing studs, the insulation and the precast,” Kaplan says. This differs from traditional precast construction, with different manufacturers and installation crews handling each of these building-envelope elements, individually. In such projects, he says, “if something happens in the future, everyone’s pointing fingers.”

As one would expect, there was a learning curve for Kaplan, in terms of SlenderWall’s detailing requirements. But he says the SlenderWall-producer’s team at Smith-Midland was very responsive to all his questions, providing design details in graphic formats compatible with KAI’s Revit platform, and lending assistance on such safety-related issues as the appropriate means for fire-stopping the gap between the edge of the floor slab and the back of the precast panel.

“They were able to point me to UL assemblies they’ve used on other projects – they were able to answer all my questions and they provided the graphics,” he says. And the combination of vapor barrier and insulation proved to be a big timesaver for Kaplan and his team, because it meant that complicated building-envelope questions could be answered with a single phone call. “A huge advantage was that it was one guy taking care of the energy code.”

A smooth construction process. As KAI’s plans moved from CAD screen to the construction site, the process of installing the SlenderWall panels proved just as smooth as their design, according to Kaplan. One concern had been pairing the traditional architectural precast used at ground level with the SlenderWall panels used to clad the floors above. Because the precast was also fabricated by Smith-Midland, the Acid Washed finish was a perfect match between the two materials. And, thanks to clear, consistent detailing, erection proceeded on time and on budget, with no complications for the Walsh Construction team. 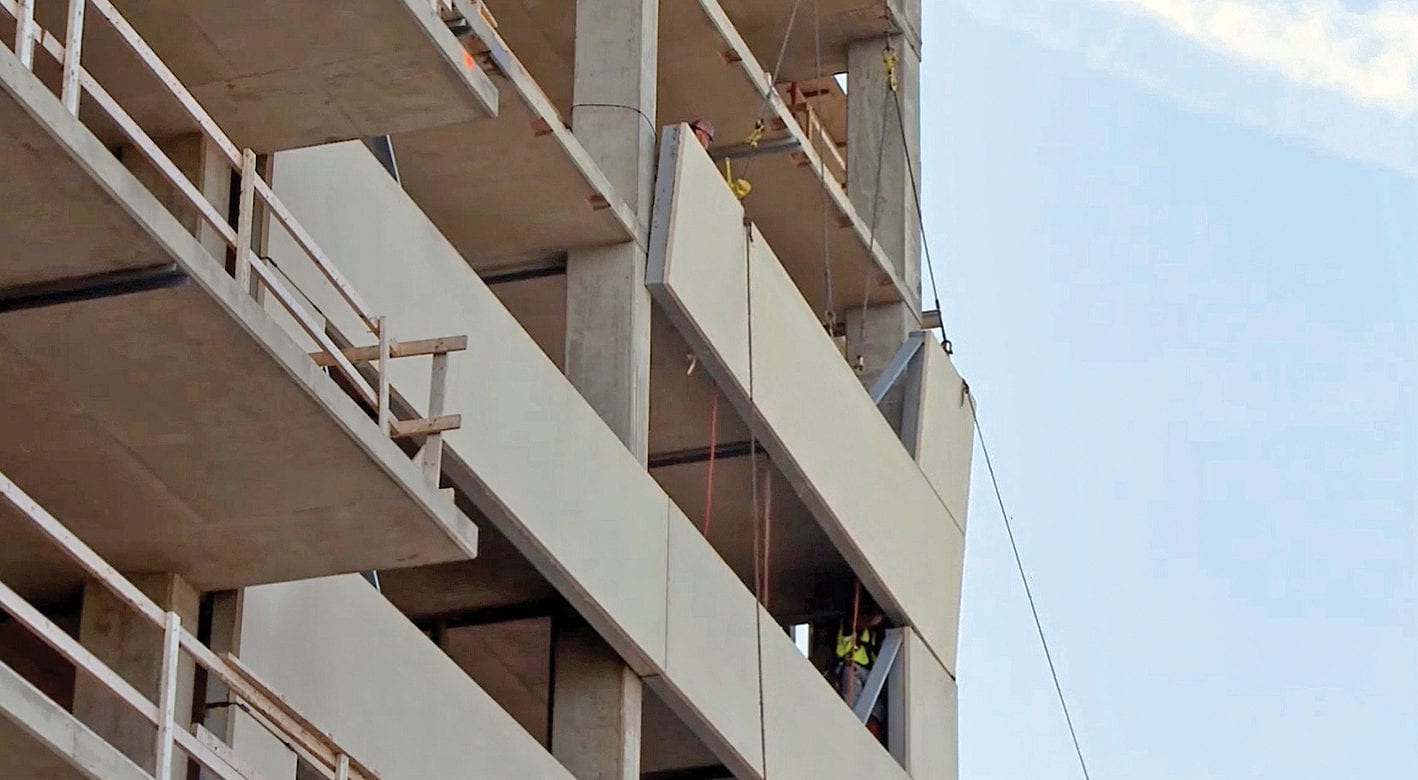