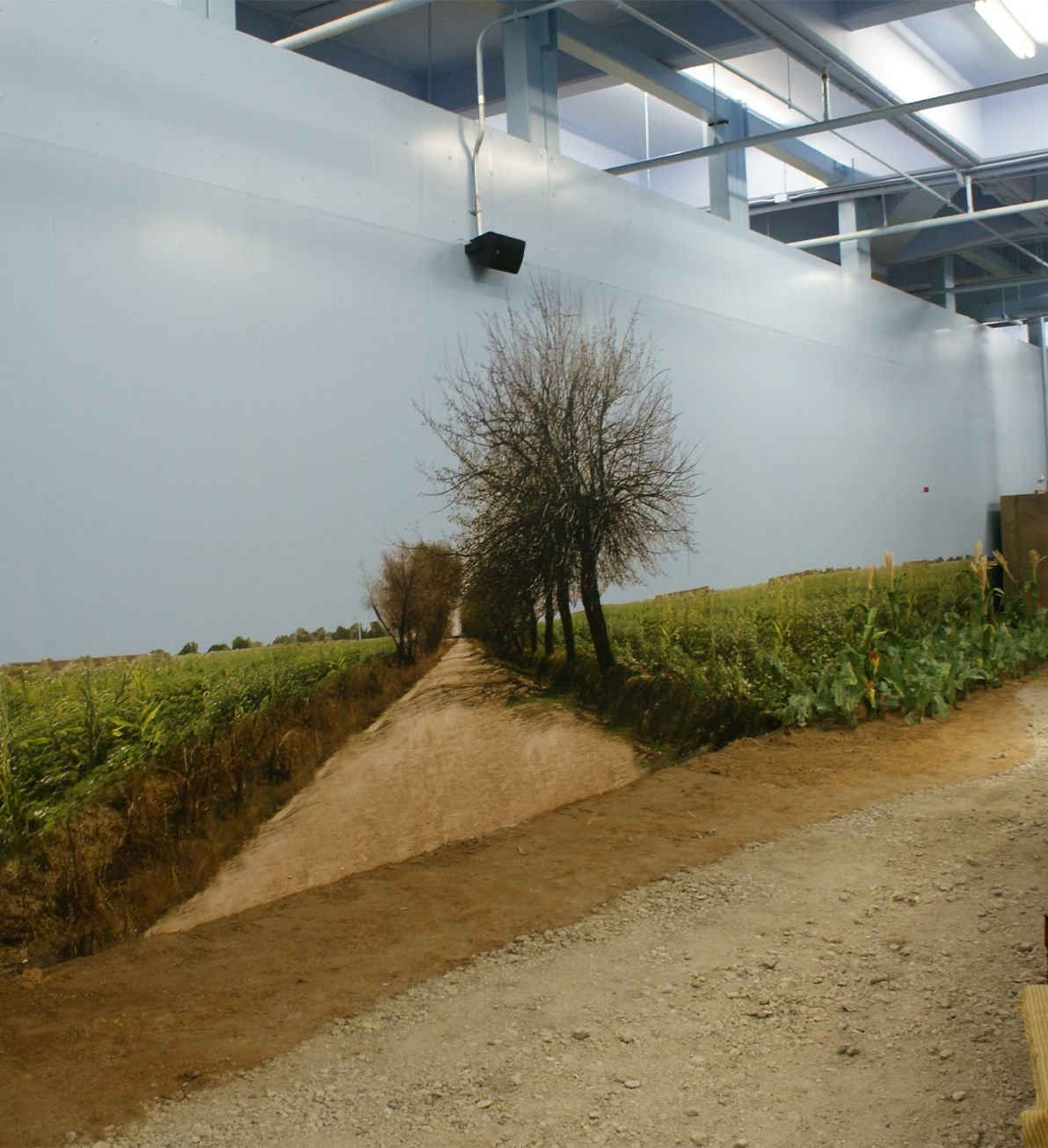 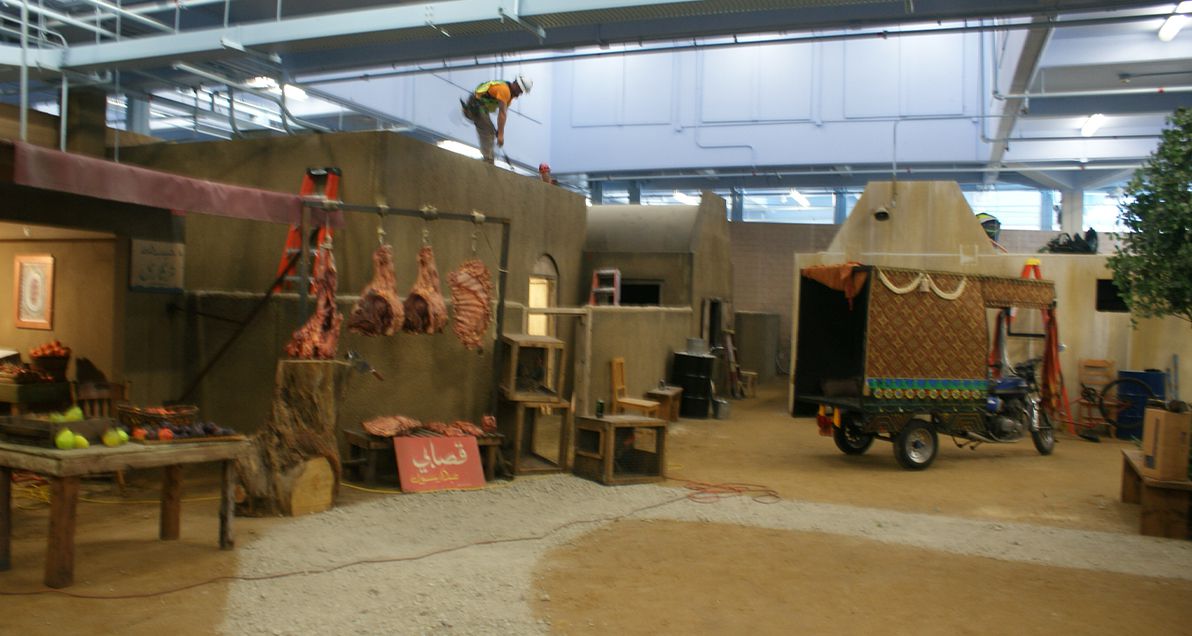 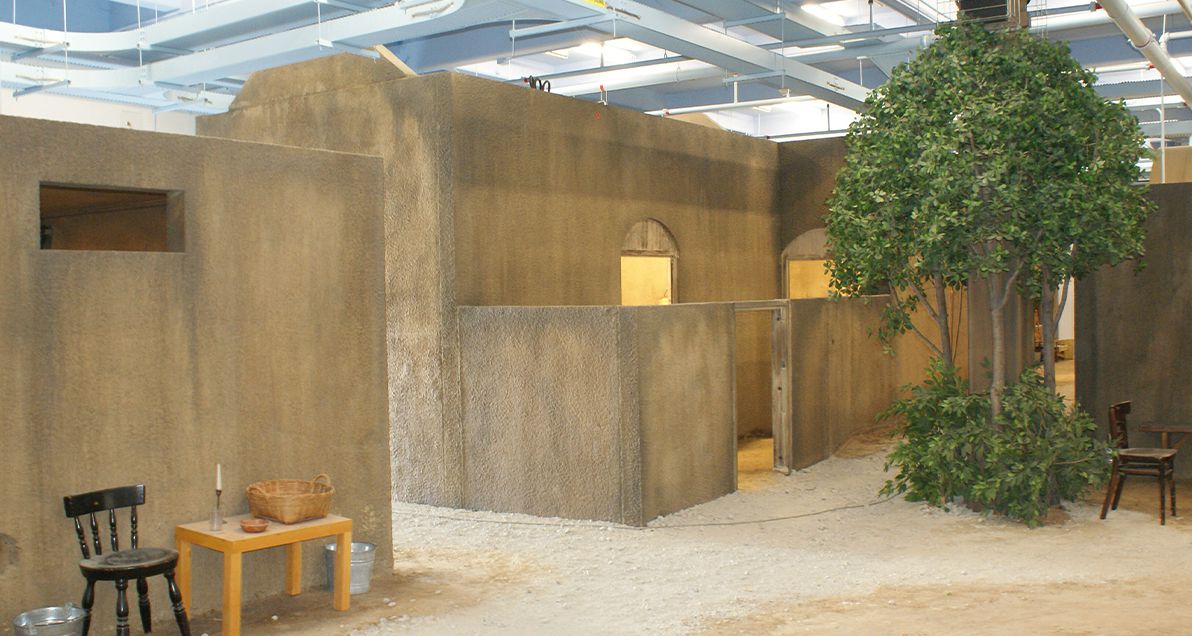 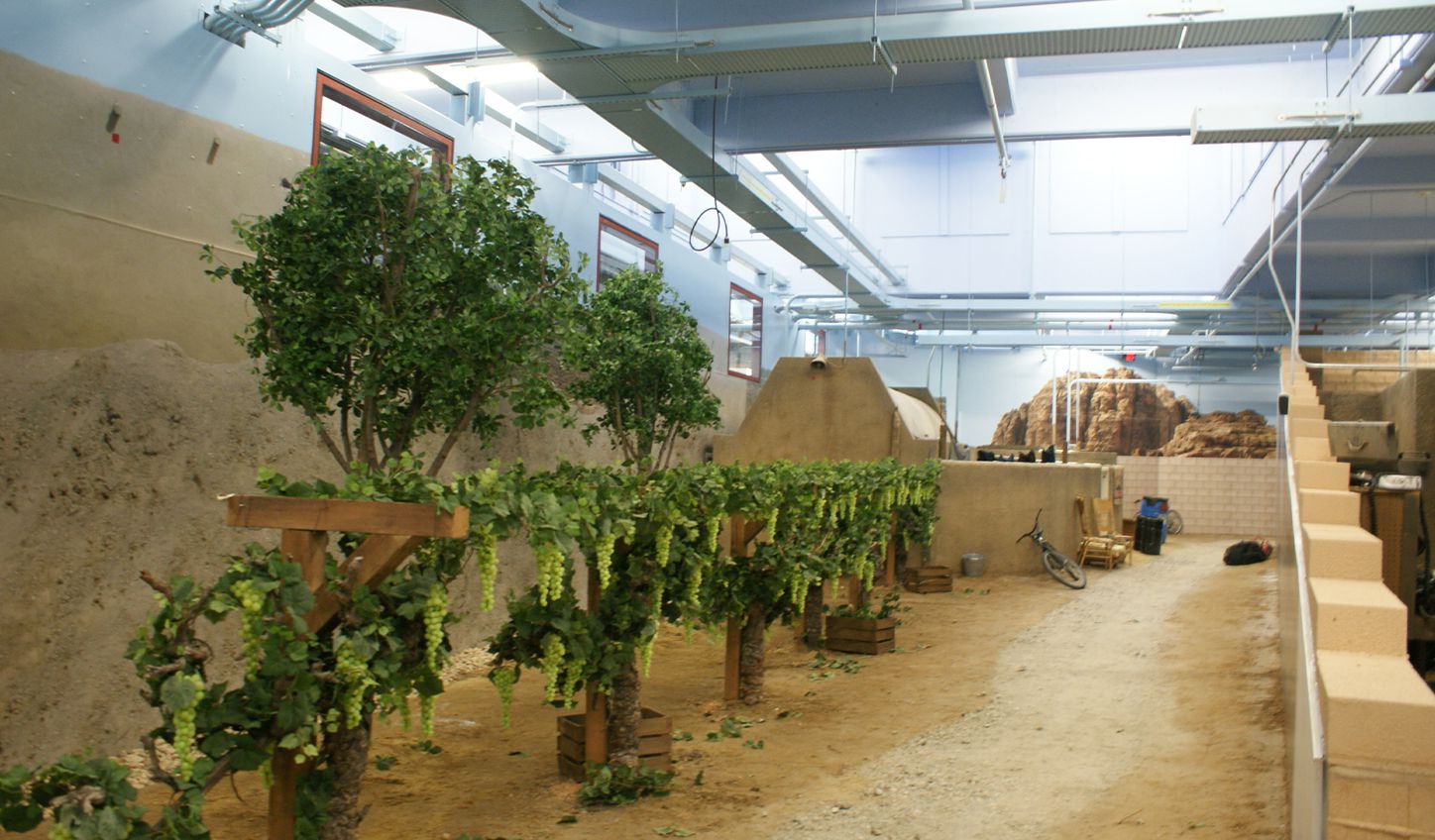 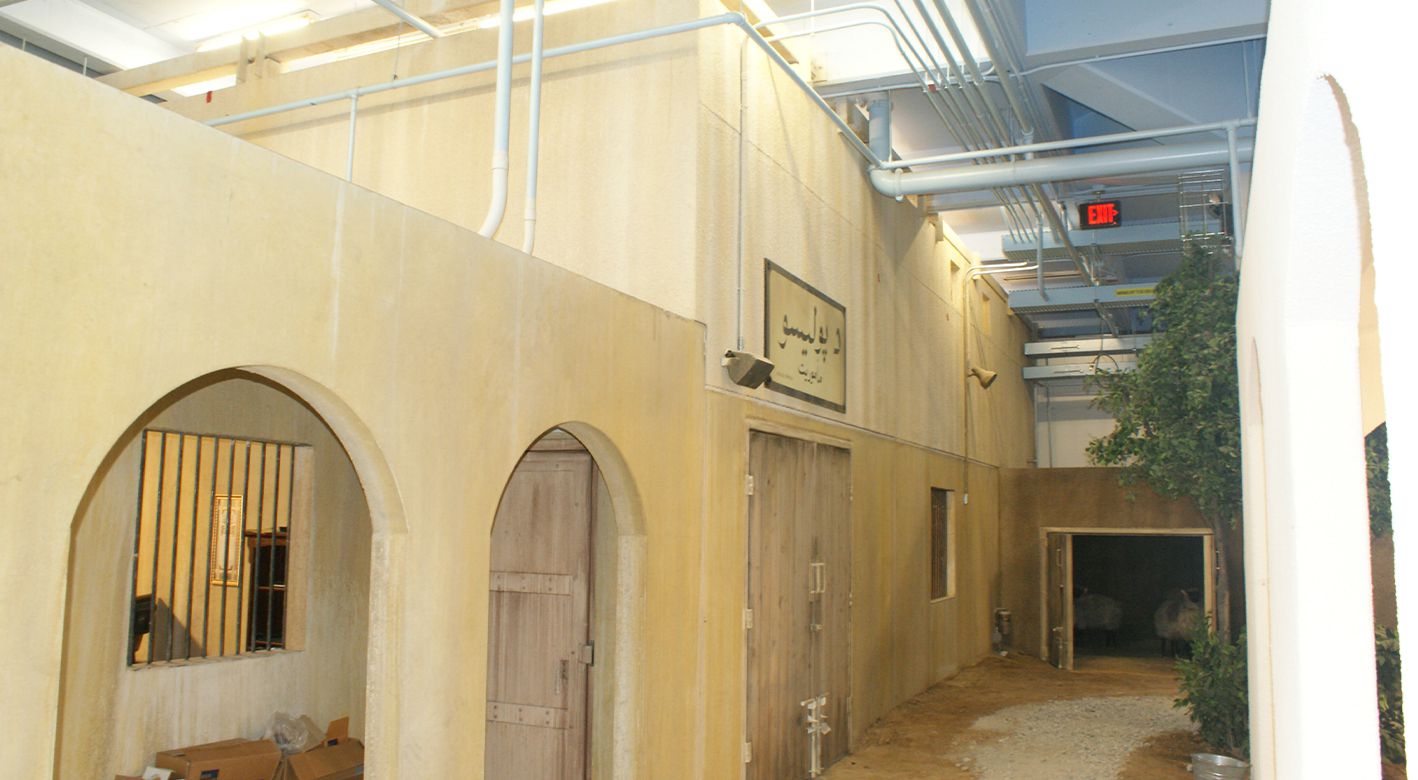 Prefabricated roof slabs, a 10′ perimeter wall, an 8′ courtyard wall, a concrete staircase, an interior courtyard wall, a 9′ village wall, 12′ village wall, and 23 prefabricated buildings were erected in an existing warehouse building. The smallest building was the living area of the sheik’s house (11’x11′), and the largest building, the mosque (approximately 23′ x 22′ — 2 stories tall).

There were two distinct aspects of this project that were innovative. First, the mock village was installed inside of an existing warehouse that was built at Camp Lejeune in the 1940’s. This required Smith-Midland to use a special “low overhead” forklift with a custom-built lifting beam during installation of the panels inside of the warehouse to allow the equipment to set the panels without interfering with the roof structure, electrical lines and other mechanical equipment hanging from the ceiling. The panels also had to be set at an angle onto a custom built trailer outside of the warehouse so that the panels could fit through an existing garage door that the owner did not want to modify.

Secondly, this project was innovative because the customer wanted to make the “mock village” as realistic as possible in order to give the Marines the most “real-life” training experience possible including aromas of roasting meat and cedar, dirt floors, roadside bombs and video shown on the walls inside of a building depicting children inside of a classroom. The precast concrete building and courtyard walls add to the “real-life” training because they have the appearance of adobe “mud huts” that are found in regions throughout Afghanistan. The “mud hut” look was made possible by using an earth-toned pigment in the concrete and a custom formliner.

Extensive engineering coordination between Smith-Midland and the customer was required to determine the proper reinforcing and hardware for the many panel-to-panel and panel-to-floor connections.

Compared to other forms of construction such as cinder block or wood, the precast option was less expensive because the cost of treating other forms of construction with an “adobe appearance” would have been very high. Precast was also less costly because the project was a wage scale project and the labor to install the precast panels was much less than the labor that would have been required for wood or cinder block construction.

Smith-Midland completed its work in a 3-month time-frame. This extremely aggressive scheduled required a lot of time and resources on engineering and drawing of shop tickets up front. Once production began, manufacture of eight panels per day was needed to keep on schedule. Twelve panels were erected per day once on-site installation began.

The precast concrete walls were installed in approximately 26 days. The Marine Corps. was very impressed by the speed of installation, quality of the product and safety awareness. 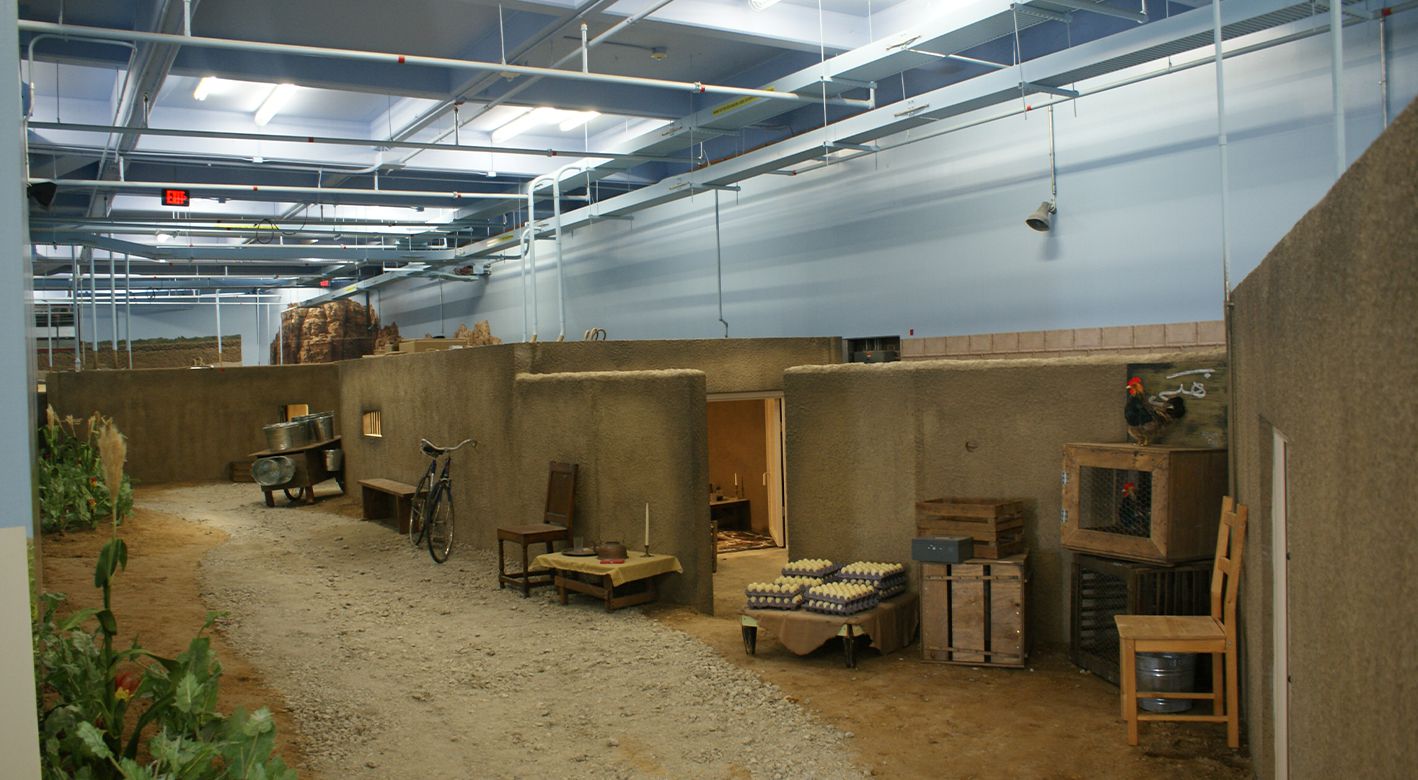